Learn how to grow your cucumbers from seed

There are cucumber varieties suitable for growing outdoors or in the greenhouse. Outdoor cucumbers, also called ‘ridge cucumbers’, will tolerate cooler climates and are often spiny or rough to the touch. Greenhouse cucumbers form smoother fruits but do need that extra warmth for success. Some varieties will happily grow inside or out, in a sunny, sheltered spot in the garden.

Cucumbers need temperatures of at least 68ºF (20ºC) to germinate, so either place pots in a propagator for speedier germination, or simply wait until late spring to get started. Once the seedlings appear, remove the weakest to leave one per pot.

Greenhouse cucumbers can be planted into beds, large containers of potting soil, or growing bags. If using the latter, plant two cucumbers per bag into bottomless pots set on top of the growing bag. These will help to trap moisture every time you water, instead of it running off over the surface.

Put in place supports such as bamboo canes, vertical wires, strong netting or trellis. Train vines up their supports then pinch out the growing tips when they reach the top to encourage side shoots. Pinch out the tips of side shoots after each developing fruit to leave two leaves beyond each fruit.

Feed plants every two weeks with a liquid fertilizer that’s high in potassium and keep these thirsty plants moist at all times.

Unless you are growing an all-female variety, remove all male flowers from greenhouse cucumbers. This prevents bitter-tasting fruits. It’s easy to identify female flowers by the slight swelling of the embryonic fruit behind each bloom. 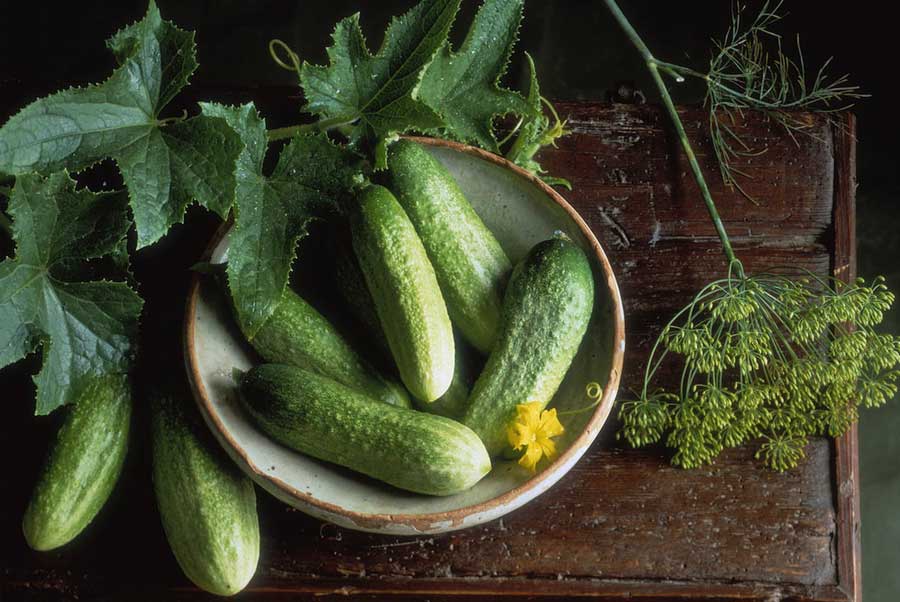 Outdoor cucumbers should be planted out when the soil has warmed in late spring or early summer. Gradually acclimatize plants for a week or two beforehand. A cold frame is useful for this hardening off period. In warmer climates you can sow seeds straight into their final growing positions.

Cucumbers prefer rich, fertile soil, so dig in plenty of well-rotted organic matter such as compost before planting. If you’re growing your cucumbers upwards using supports such as trellis, set plants at about 18 inches (45cm) apart. If you’ll be leaving them to sprawl over the soil surface instead, plant them about three feet (90cm) apart.

Pinch out the growing points after six leaves have formed to encourage plants to produce fruiting side shoots. Climbing cucumbers may need tying to vertical supports, particularly as the heavy fruits start to develop.

Another option for outdoor cucumbers is a cucumber frame. To make one, stretch chicken wire or netting over a wooden frame and secure it into place with staples or U-shaped nails. Prop the frame up onto an A-frame made of bamboo canes.

The beauty of this type of support is that leafy salads like lettuce may be grown underneath to take advantage of the shade cast by the cucumbers – a clever solution for growing cool season crops in hot climates.

Harvest cucumbers while they’re still small and tender. Cut them off plants using a sharp knife or pruners. Pick often to encourage more fruits and, if you can, harvest in the morning while it’s still cool. Gherkin varieties are picked very small – an inch (3cm) long for crunchy cornichons or three inches (8cm) long for larger pickles. Cucumber and dill are perfect pickling partners and the ideal solution for summer gluts.

How to grow lemon trees